Link to this page

Girl with a Pearl Earring c. 1665
Order a Hand-Painted Reproduction of this Painting

Relatively little is known about Vermeer's life. He seems to have been exclusively devoted to his art. The only sources of information are some registers, a few official documents and comments by other artists; it was for this reason that Thore Burger named him "The Sphinx of Delft". Vermeer became the subject of a biography by John Michael Montias: Vermeer and his milieu: a web of social history (Princeton, 1989), where the social history covers up for the elusiveness of the central character.

Johannes Vermeer was born in the city of Delft in the Netherlands and after a few days he was baptised in the Reformed Church on October 31, 1632. His father, Reynier Janszoon, was a middle-class silk or caffa worker. In 1615 he married Digna Baltens, a woman from Antwerp. In 1620 a daughter, Gertruy, was born. In 1625 Reynier Janszoon was involved in a fight with a soldier, who died from his wounds five months later. Around 1631 Reynier Janszoon leased an inn called The Flying Fox and started to deal in paintings. As a sideline, he continued to work as a weaver. In 1641, when the lease ran out, he bought a larger inn at the market square, named after the Belgian town "Mechelen". Vermeer's only sister, Gertruy, worked at the inn helping her parents, serving drinks and making beds. In 1647 she married a frame maker. When Vermeer's father died in 1652, Vermeer replaced him as a merchant of paintings.

Despite the fact that he came from a Protestant family, Vermeer married a Catholic girl named Catherina Bolnes, in a nearby village called Schipluiden. For Vermeer it was a good match: his mother-in-law, Maria Thins, was significantly wealthier than he, and it was probably she who insisted Vermeer convert to Catholicism before the marriage in April 1653. Some scholars doubt Vermeer became Catholic, but one of his paintings, The Allegory of Catholic Faith, made between 1670 and 1672, reflects belief in the Eucharist. It was probably made expressly for a Catholic patron or for a schuilkerk, a hidden church. At some point the couple moved in with Catherina's mother, who lived in a rather spacious house at Oude Langendijk, close to a Jesuit church. Vermeer lived there for the rest of his life, producing paintings in the front room on the second floor. His wife gave birth to fourteen children: three sons and seven daughters; four were buried at an early stage and their names and genders are not known. The youngest child, Ignatius, was named after the founder of the Jesuit order.

It is not certain where Vermeer was apprenticed as a painter, nor with whom. It is generally believed that he studied in his home town and it is suggested that his teacher was either Carel Fabritius or more likely Leonaert Bramer. It is possible he taught himself or had information from one of his father's connections.

On December 29, 1653, Vermeer became a member of the Guild of Saint Luke, a trade association for painters. The guild's records make clear Vermeer did not pay the usual admission fee, a hint that his financial circumstances were difficult. In 1657 he might have found a patron in the local art collector Pieter van Ruijven, who lent him some money. In 1662 Vermeer was elected head of the guild and was reelected in 1663, 1670, and 1671, evidence that he was considered an established craftsman among his peers.

Vermeer worked slowly, probably producing three paintings a year, and on order. When Balthasar de Monconys visited him in 1663 to see some of his work, the diplomat and the two French clergymen who accompanied him were sent to a baker, probably Hendrick van Buyten, who owned one painting he was very proud of.

In 1672 a severe economic downturn (the "Year of Disaster") struck the Netherlands. Not only did a French army under Louis XIV invade the Dutch Republic from the south (known as the Franco-Dutch War), but an English fleet, in the Third Anglo-Dutch War and two allied German bishops attacked the country from the east, trying to destroy its hegemony. Many people panicked, and shops and schools were closed. Some years passed before circumstances improved. The collapse of the art market damaged Vermeer's business as both a painter and an art dealer, as his wife stated later. With a large family to support, Vermeer again was forced to borrow money.

In December 1675 Vermeer fell into a frenzy and died within a day and a half. In a written document Catharina Bolnes attributed her husband's death to the stress of financial pressures. She, having to raise eleven children, (underlined in the original) asked the High Court to allow her a break in paying the creditors.

The Dutch microscopist Antonie van Leeuwenhoek, who sometimes worked for the city council, was appointed trustee. The house, with eight rooms on the first floor, was filled with paintings, drawings, clothes, chairs and beds. (Vermeer did own three paintings by Fabritius.) In his atelier there were among rummage not worthy being itimized, two chairs, two painter's easels, three palettes, ten canvases, a desk, an oak pull table and a small wooden cupboard with drawers. Nineteen of Vermeer's paintings were bequeathed to his wife and her mother. Catherina sold two more paintings to the baker in order to pay off the debts.

In Delft, Vermeer had been a respected artist, but he was almost unknown outside his home town, and the fact that a local patron, van Ruijven, purchased much of his output reduced the possibility of his fame spreading. Vermeer never had any pupils and his relatively short life, the demands of separate careers, and his extraordinary precision as a painter all help to explain his limited output. 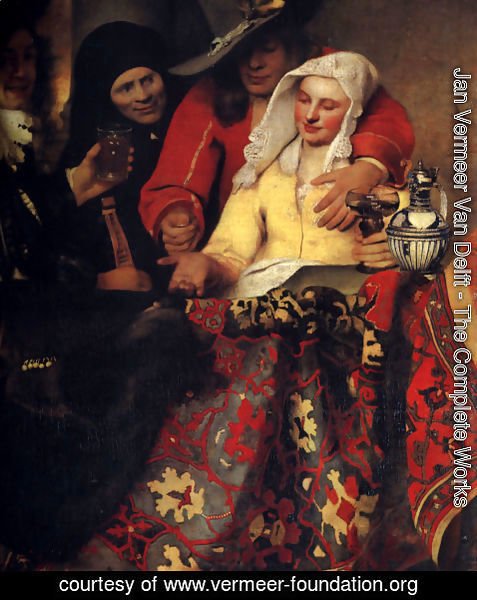 Vermeer produced transparent colours by applying paint to the canvas in loosely granular layers, a technique called pointille (not to be confused with pointillism). No drawings have been positively attributed to Vermeer, and his paintings offer few clues to preparatory methods. David Hockney, among other historians and advocates of the Hockney-Falco thesis, has speculated that Vermeer used a camera obscura to achieve precise positioning in his compositions, and this view seems to be supported by certain light and perspective effects which would result from the use of such lenses and not the naked eye alone. The extent of Vermeer's dependence upon the camera obscura is disputed by historians.

There is no other seventeenth century artist who early in his career employed, in the most lavish way, the exorbitantly expensive pigment lapis lazuli, or natural ultramarine. Vermeer not only used this in elements that are naturally of this colour; the earth colours umber and ochre should be understood as warm light within a painting's strongly-lit interior, which reflects its multiple colours onto the wall.

This working method most probably was inspired by Vermeer's understanding of Leonardo's observations that the surface of every object partakes of the colour of the adjacent object. This means that no object is ever seen entirely in its natural colour.

A comparable but even more remarkable yet effectual use of natural ultramarine is in The Girl with a Wineglass (Braunschweig). The shadows of the red satin dress are underpainted in natural ultramarine, and due to this underlying blue paint layer, the red lake and vermilion mixture applied over it acquires a slightly purple, cool and crisp appearance that is most powerful.

Even after Vermeer's supposed financial breakdown following the so-called rampjaar (year of disaster) in 1672, he continued to employ natural ultramarine generously, such as in "Lady Seated at a Virginal." This could suggest that Vermeer was supplied with materials by a collector, and would coincide with John Michael Montias' theory of Pieter Claesz van Ruijven being Vermeer's patron.

Vermeer painted mostly domestic interior scenes. His works are largely genre pieces and portraits, with the exception of two cityscapes.

His subjects offer a cross-section of seventeenth century Dutch society, ranging from the portrayal of a simple milkmaid at work, to the luxury and splendour of rich notables and merchantmen in their roomy houses. Religious and scientific connotations can be found in his works.(From Wikipedia)

Report an error on this page